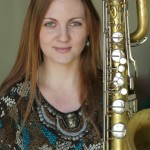 Jo graduated from Berklee College of Music in Boston, MA in 2007 with a dual major in songwriting and baritone saxophone. She held the baritone saxophone chair in Phil Wilson’s Rainbow Band for several semesters, as well as Back Bay Brass and the Contemporary Berklee Wind Orchestra. Her first album, I’ll See You in Hell, etc., was recorded during her senior year at Berklee.
Jo is currently on tour this fall on both coasts. She has spent the past few years traveling between her home in Pawleys Island, SC & Santa Monica, CA. Her song, “Whiskey Martini” is the current theme song for the video sketch group Sweet n’ Sour Comedy. She was has been featured in the Saxophone Journal several times in the 2011 year and received national attention for her new album, Copley Inbound.